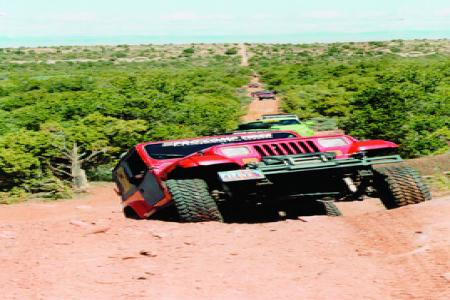 Dome Plateau is a large highland area north of the Colorado River and east of Arches National Park. To reach the region from Moab, one must travel more than 28 miles of highway to enter from the Dewey Bridge area on Utah 128. The southern highlands are forested with pinyon and juniper and are cut by canyons. The nearby Poison Strip and Yellowcat areas are the locales of many old vanadium and uranium mines. Approximate mileages: 98 total, 30 off highway.

The trail goes up the Colorado River to leave the highway just past the Dewey Bridge. It follows below the line of Entrada Sandstone cliffs that have three noteworthy arches in the first few miles. The plateau slopes upward to the south but is broken by canyons, two of which are crossed on the way to an outstanding viewpoint high above the Colorado River. The trail route returning northward views distant arches in Arches National Park and passes near La Boca Arch. This great family trail will also visit some dinosaur tracks. Some interesting sandstone caves may be visited.

Most of the trail is dirt. The eastern part is sandy, rocky, and bumpy. One hill has loose rock and rock ledges. There are about 30 miles of paved access road at each end of the trail.

"Again-and-Again Hill" is one rocky, ledgy climb after another, but your leader may offer a guided bypass.